Behind the Garden & Tavern Scenes 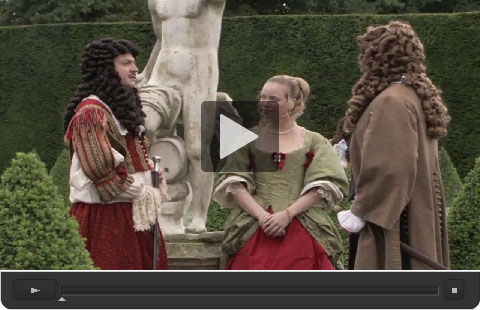 This edit, when compared to the edit used in the film, illustrates how each segment of the scene was constructed from many takes. Those shots include a wide view of the whole garden from above, mid-distance ground-level framings of all three actors, and closeups of individual actors.

The film's edit created a "character-driven" narrative with Charles II's 17th century "power garden" and the royal baroque music setting the mood of the scene.

The Garden Scene
Charles II (Thomas Arnold) and Lady Castlemaine (Antonia Kinley) meet with Col. Nicolls (Julian Harries) in the Garden at Whitehall where Charles directs Nicolls to seize Manhattan from the Dutch. 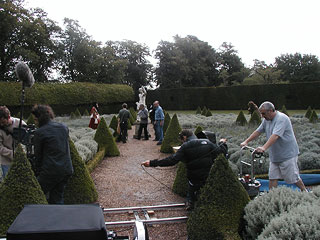 The crew sets up for the Garden Scene at Ham House Gardens near Richmond outside London. Unfortunately,
a light mist inhibits early setup; and, we are on the Heathrow flight path. Every three minutes, almost like clockwork, a large passenger jet rumbles noisily over on takeoff or landing. 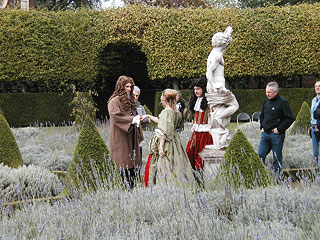 A brief rehearsal with David Hickman (Director, behind Nicolls) and Chris Openshaw (Director of Photography, on right) looking on. Bacchus (in marble) seems indifferent to the production but has taken direction well, not moving an inch. 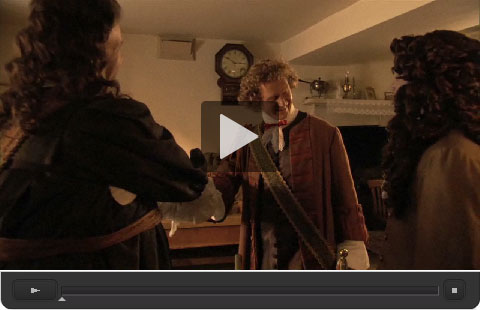 This composite once again show several takes. Here, however, the several takes of the two segments of dialog illustrate the "raw material" the editors and directors sculpted into the finished work.

In the takes of the first segment Holmes arrives in the tavern, greeting Monck and then Pepys in very different ways. For the second segment Holmes offers his candid assessment of Pepys ("an irritating fellow") and conveys, in his own inimitable way, his intentions for Pepys' wife.

The Tavern Scene
General Monck (Steve Varnom) and Samuel Pepys (Ilan Goodman) discuss the merits and risks of the raid down the African coast with Robert Holmes (Mark Lingwood), who later, with Pepys gone, confides special sentiments for Pepys' wife to Monck. 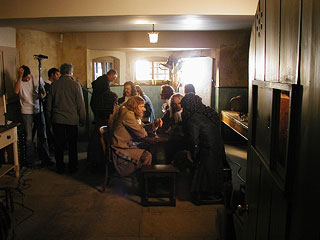 The crew sets up for the Tavern Scene in a basement room at Ham House. The space is cramped but feels authentic. Lighting, as always, takes time as the Director of Photography (Chris Openshaw) directs every photon
of light to its appointed surface. 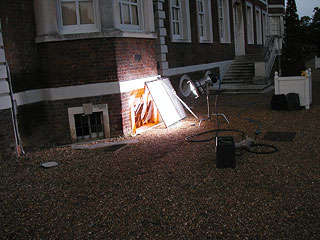 Many interior scenes are shot at night after the exterior scenes during the day. So this small 'sun' was rigged just outside the window to shine down on the basement tavern.