Behind the Ship & Fort Scenes 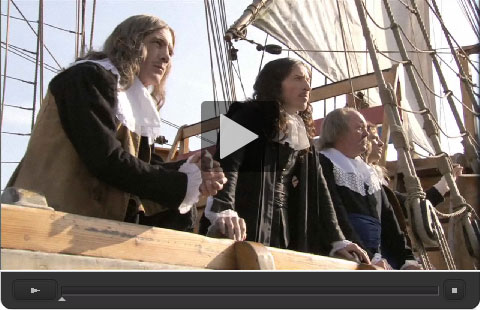 This scene shows how the sound designer using many takes synthesizes an audio track without the many unfortunate background sounds of that noisy day in Bristol.

The Ship Scene
DeRuyter (Nick Stringer) returns from his successful counter-raid to Africa and America and discusses the new English tactics used at Lowestoft with DeWitt (Roger May), Tromp (Garry Cooper), and the captain who urges tactical reform, Evertsen (Roger Cambrinus). 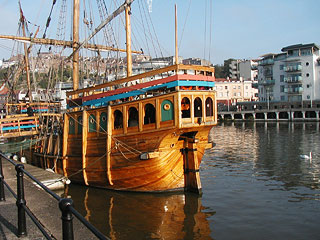 The set for the scene was the Matthew, a replica of the 15th century ship sailed by John Cabot to North America in 1497. Its port is in Bristol (UK) that sent many expeditions to the new world . Unbeknownst to us, the Bristol Marathon was run the same day as our shoot. This meant our sound recording had to compete with public address systems sirens of ambulances carrying the less than fit to the hospital, musket volleys from the reenactors fifty yards away, and many, many onlookers who were intrigued by people dressed up like 17th century Dutch admirals. 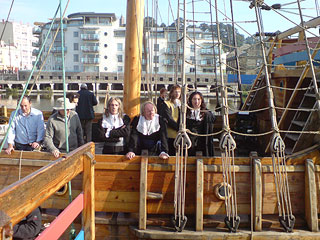 The actors stand near the railing of the ship as the crew sets up camera and sound on the dock below them. The blue shirted fellow on the left is Paul Ashby, our UK Producer, then working as first assistant director calling for quiet on the set, which he could get, and hoping for quiet from the marathon, which he could not always get. David Hickman, our director, is next and then Tromp (Garry Cooper), DeRuyter (Nick Stringer), Evertsen (Roger Cambrinus), and DeWitt (Roger May). 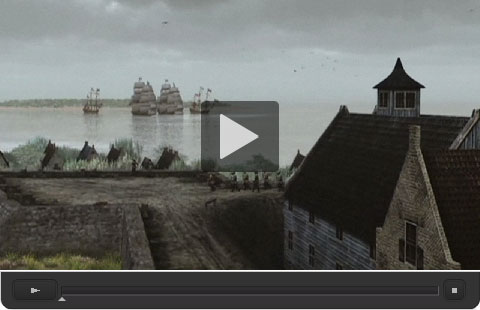 The Fort Scene illustrates how the animation sets up the New Amsterdam Fort Scene with the camera coming down Broadway and then into the fort itself. It also shows how the actors were then “integrated” into the scene. In the split view the right side shows the original footage with green screen, the left side shows how compositors replaced the green screen with animations of the air, harbor, and the English fleet.

The Fort Scene
From the Dutch fort in New Amsterdam, Peter Stuyvesant (Colin Starkey) and his Lieutenant (Oliver Pengelly) discuss the disturbing scene of four English warships anchored off Manhattan. 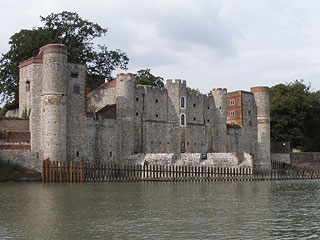 The set for the New Amsterdam fort scene was Upnor Castle, which also stood in for itself for the Medway Scene later in the film. Built in Queen Elizabeth's reign it still, over 400 years later, impressively stands guard on the Medway River near Rochester. 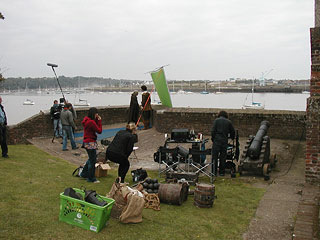 Stuyvesant and his Lieutenant seemingly oblivious to the modern sleek sail boats in today's Medway, establish their wall shot with the aid of a green screen held in place against a sharp breeze by Jane Wrigley and Shelly Manser-Cavanagh after their duties with costumes and make-up were finished. 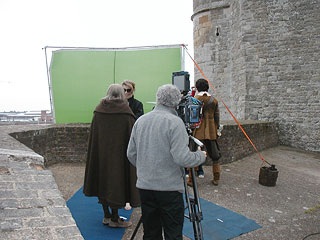 Director David Hickman looks through camera as the green screen, supported by small outcroppings on the exterior walls of the fort, blocks modern day Medway.